We had a big trip to Chicago for my back-to-school shopping and we visited a television studio. I like Chicago because the buildings are really tall and they have every store you could ever think of and lots of great food. I also like shopping on Michigan Avenue because you can walk from one store to the next and most of the people are really nice.


During this trip we visited a television studio. We had to have advance permission to visit and when we arrived I had to show my school I.D. to security so I could enter the building. They also searched our bags and we walked through a metal detector just like the ones at the airport. I had a piece of paper in my purse so they took it out and said I could get it back when I left the building, you can’t take paper in I guess. We sat in a huge waiting area for almost two hours before we could go into the studio and the security people would walk around and make sure everyone behaved themselves.

We finally got called to go into the studio. When we entered we came in behind the audience seats and it reminded me of a basketball game. In the studio we could see windows all around the top of the seat section for cameras to catch everything that happened. They also had cameras on cranes which could stretch over the audience and get all the angles that the other cameras might miss. And they had more cameras on stands that rolled around the floor with people behind them pushing them around. I couldn’t believe how many cameras they had in such a small place. They had a stage in the center and really cool walls behind the stage and I could tell that the walls could move.

When I looked at the ceiling they had a million different types of lights pointing and hanging from just about every space possible. We met a man who could control the lights and some of the cameras from a computer. He said during filming he sits in a room hidden behind the audience and high up so he can see everything going on. They told us that it takes over 100 people to work behind the scenes to produce one show.

If you visit Chicago you should wear really comfortable shoes so you can walk a lot and visit the museum. I also liked the Water Tower place that had all the stores and I liked the television studio. We didn’t get to see everything but Mom said we would return next summer and maybe stay longer so we can see more stuff. 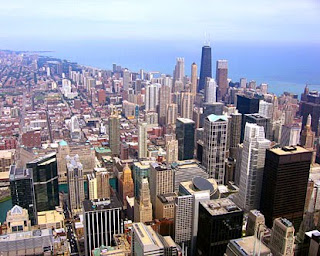 Posted by Krista Kays Adventures at 12:34 AM