Today I met one of my Mom’s co-workers, John the Aviation Technician. John is kind of a mechanic for planes which I thought were really interesting because I like planes. John showed me a small plane and all the control stuff in the plane and how my Mom’s software makes things move. When the plane has problems John will inspect it and figure out if the problem is physical or software stuff. If it’s mechanical John can fix it. John attended a special program in college where he learned all about the mechanical stuff and how a plane is put together and how it works. He said he had to learn about water and airflow, electronics, welding and all sorts of other stuff so he knows every inch of the plane. He had to pass some really hard tests and get certified so he could fix planes.

It was fun to meet someone who works with my mom and learn about her job and John’s job. I feel safe flying in any plane that my mom and John worked on because they are both really smart. 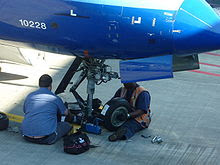