This weekend we visited a Renaissance Faire and I watched lots of different shows. We saw one show with people eating fire and walking on glass but they are professionals and said kids shouldn’t try it at home. We also saw some funny people making jokes so everyone in the audience laughed. The people dressed in costumes with the ladies in beautiful long dresses and the men looked like kings. They even had a king and queen and they had a parade around the park. We watched some musicians but my favorite was Anam Kara.

Anam Kara had three people in it, two ladies and one man. They played a hammered dulcimer, harp, guitar and some others. They also sang some pretty songs and some really funny ones. I talked to the one lady, Luverne Adamson and she said she’s a nurse but they love to play and they go to festivals and also weddings, schools and other events. They even have a music CD so they must be kinda famous or at least I think they are because they had lots of people listening to them.

Some of the other people at the faire said that performing is their full-time job and they travel all over the United States and sometimes even Canada. I also met some college students who study performance in college and they work at the fairs for experience. It was really an interesting day with lots of fun stuff and even the food was interesting. Next year I want to dress-up like a princess so I can play along and walk with the queen. 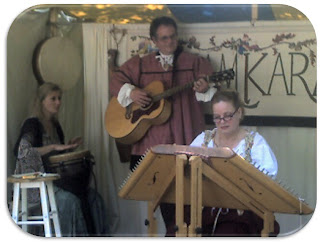 Posted by Krista Kays Adventures at 9:19 AM