The past month has been a busy one for me with after school sports and fieldtrips. I can't believe school is almost over and summer vacation begins soon.

My brother Kevin and I went to a hobby store yesterday looking for paint. I thought it looked like a really fun store with lots of train stuff and they even had a Christmas train that looked like the Polar Express train from the book and movie. The store owner said he liked trains since he was a young kid so he's worked on them for a really long time. He became the store owner so he could help other people as they build their model train sets. Some people have really huge sets that take up entire rooms and they have more than one train going around the track at once. I like the trains that make noises like real trains and have people talking. I think it was interesting that the store owner took something he had fun with and made it into a store for other people. 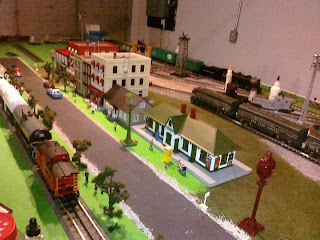