We had a really fun weekend, Saturday night we watched a Laser Light Show at the planetarium. The lasers created pictures on the ceiling and you had to sit back in your seat and look straight up to see everything. They played music and the lights bounced around and changed to the music. Sometimes the lights made pictures of clocks and stuff, even a beating heart. I had to close my eyes sometimes when they really went crazy with the lights because it made me dizzy.

I thought that they just made everything with computers but we talked to one of the guys who made the show. He said that they use the lights and shadows to create some illusions. He started in graphic design but also had to learn laser technology, electrical work and repair because of all the equipment involved including the speakers and the lights. They work a long time to create a one hour show and time it with the music. He said it's a really fun job but when things go wrong it can be really stressful. I told him that I really liked the show but I had to close my eyes in parts. He said sometimes people have to leave the planetarium because they get sick. I'm glad I just closed my eyes so I didn't get sick. 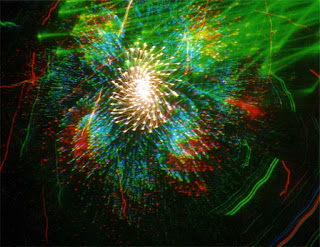