We are watching the 2010 Olympics in Vancouver, Canada. I like the figure skaters the most because it's almost like dancing and I like to skate. I also like the snowboard guys because they look really cool and I like the games they have for the PS3. The athletes spend years training every day and some of them even said they started when they were little kids but some didn't decide to try for the Olympics until they were older. I think it would be fun to skate for a living but Mom said that many of the athletes have other jobs. One skater several years ago was even going to medical school while she trained. I see several of the athletes in commercials and on products like my video games and cereal boxes. I bet it's really exciting to win a medal and be an Olympic champion. Even though I like skating maybe I would do a summer sport because it's a lot warmer, some of the people on TV look really cold. 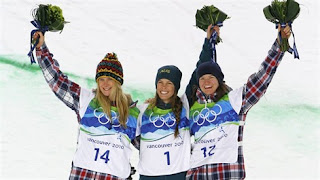