Mrs. Crawford picked me up and school today because she had an appointment at the eye doctor, she sat on her glasses. When she picked me up she had an old pair of glasses on and looked really funny because the glasses where really huge and had points on the corners of the top like wings.

When we arrived I noticed a sign with three names and a bunch of words that all started with the letter O and hard to pronounce: Ophthalmologist, Optometrist and Optician. We walked in and the lady at the desk took Mrs. Crawford’s information and we had a seat in the lobby.


Today Mrs. Crawford had to see the Optician because that person fixes the glasses. The Optician is the person who sits at a desk and helps people fit new glasses and figures out what lenses they need. Mrs. Crawford’s Optician was names John and he looked at the broken glasses and took them back to a room and worked on them. When he came back the glasses looked new again, the lens hadn’t broke just the frames got bent. He put them on Mrs. Crawford’s face and looked at them from front and side and made a few changes until they fit right again. He also let me try a bunch of the glasses and some of them looked really funny. My favorite glasses had diamonds on the front and side and made me look like a famous singer or something like that.
It’s the weekend!!!!! Really looking forward to playing out in the snow. See you later. 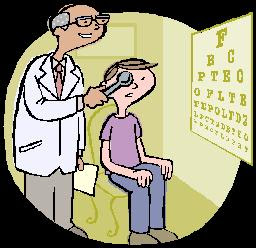